By the time Booker T and his MGs got around to doing Melting Pot in 1971 little did they know that it’d be their last real ‘proper’ album and their last on Stax (1976’s Union Extended notwithstanding). It seems strange as it isn’t the usual sending off; it’s a return to all original material (their previous, McLemore Avenue was them reinterpreting the entire Beatles Abbey Road) and it’s very much the sound of a band tightening up, growing in intensity and striking out in new directions. This isn’t the usual winding down swan song that we’ve since grown accustomed to from major acts, but rather a ratcheted up, a reawakening. The record, and its influence (still endlessly sampled in hip hop) speak for itself, the band just sizzles through the eight originals, each striking in new, previously unexplored ways. Booker T and the MGs were always a remarkably innovative band, so it’s a testament to them that after almost 10 years something as fresh and exhilarating as Melting Point could have been offered.

On the topic of bass and Booker T and the MGs, not much additional needs to be said; Donald ‘Duck’ Dunn, heavily influence by Motown’s James Jamerson, is one of the instruments true innovators. Here, on ‘Chicken Pox’ he seems to both have a hand in inventing speed funk, while also being the ever steady groove master he always was. They were an ‘artists band’, the sort that most artists respected and admired, and Dunn’s influence therein cannot be overstated; supreme taste embeds all over his work. As camouflaged in a groove as he is the driver of it, his stamp is everywhere. RIP.

Since we’re in the last four selections I figured why not start selecting the songs I most readily think about when I think about bass guitar. I’ll drop the slight continued steam of consciousness that the previous posts where sort of linking themselves to one another, and just offer a few random picks where the bass work will speak for itself.

The first one I want to talk about is from The Boo Radleys’ widely far reaching 12” Lazarus EP coming from the same sessions that resulted in their August 1993 masterpiece release, Giant Steps. The extended ‘Lazarus’ on the EP preceded the slightly shorter version that appears on Giant Steps’ side two by a few weeks and showed the band moving in titanically new avenues. In the extended version the song is a varied kaleidoscope of genre, moving as adept at dub reggae bass as it is to shimmering shoe-gaze infected BritPop. It was the sound of the band at that exact moment; willing to try anything and miraculously pull it all off, for in a brief time period in 1993 the Boo Radley’s were perhaps the greatest band in the world. END_OF_DOCUMENT_TOKEN_TO_BE_REPLACED

Since my last two picks were examples of the British bass boom of the late 70’s and early 80’s (with the last entry specifically articulating a few theories as to why this boom came into being) I thought that today’s pick should be something showing more the exact influence that Motown had on the bass sound of the era.

The Jackson 5’s ‘Darling Dear’, featuring the superlative work on bass by James Jamerson, was my prototype bass sound of Motown pick, and when put before the Au Pairs and Jah Wobble you see that though influenced, the British kids interpreted bass in a much more antsy, angular way (I’d think it’d be explained in an obvious evolution; in American one slides when they danced to pop music, while in Britain in the late 70’s everyone was doing the pogo. Bass should pop and burst if pogo is what everyone is doing, while it should meander and slide if everyone is going to slink around). This isn’t to say that it was all this way, and today’s pick is meant to show a British track from the era with fluid Motown-like bass.  END_OF_DOCUMENT_TOKEN_TO_BE_REPLACED 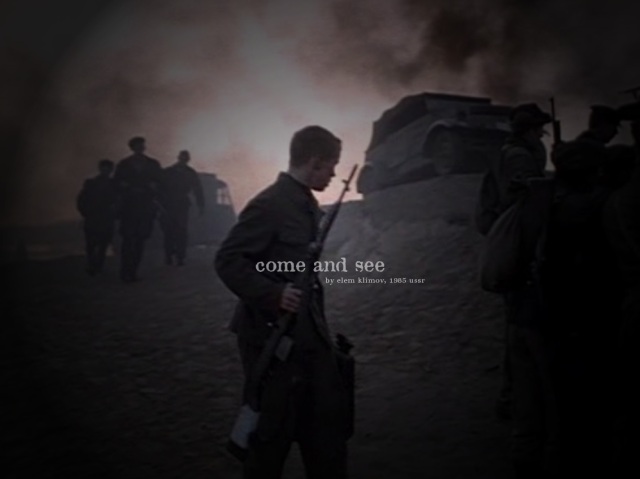 And when he had opened the fourth seal, I heard the voice of the fourth beast say, Come and see.
And I looked, and behold a pale horse: and his name that sat on him was Death, and Hell followed with him. And power was given unto them over the fourth part of the earth, to kill with sword, and with hunger, and with death, and with the beasts of the earth.

In a film that borrows its title from the words spoken by the beasts of the Four Horseman of the Apocalypse in the Bible’s Book of Revelations, it’d be interesting to note that as the phrase is continually uttered by the beasts (I count no less than four times, once each time one the Horseman open a seal) it’s meant to coerce anyone of shaky faith into belief by the threat of plagues and Armageddon that are surely to come. But, just as each (potential) action implies an opposite (potential) action, there is the promise that if these riders are avoided, or not followed, that a paradise for eternity awaits. One not of the flesh or air, but of the afterlife, a reality in need of a tremendous leap. The ‘come and see’ adage as much a fearful warning as a hopeful promise.

But that reading implies what’s to come, and while as a title to a film you’d be about to see that seems fitting (this reading prompts visions of red velvet curtains being drawn as we’re led into the horror show theater, think Dario Argento’s intro in Deep Red), the title here implies to current events (to the films World War II setting) and probably what always has happened and always will happen (especially during war). That’s the scary connection to the Book of Revelations; a book prophesying the coming end, here is read as implying it has come and our contemporary post life is akin to nomadic forsaken souls wondering an earth with only sinners. Put differently, the Book of Revelations is pure fantasy, or at the very least, something that is promised to come just don’t hold your breath, while here is an accounting of events born from actual historical truth. If we are only continually reminded of these horrors, perhaps we’d be struck into action to insure they never happen again. The meek shall inherit the earth that same book says elsewhere, but then who wants to be born and come of age in a burned out husk? Come and See accounts for two choices and they aren’t heaven or hell, but only a life of agony, or death. A title that is an urging to watch this collectively and strike to see this never happens again.
END_OF_DOCUMENT_TOKEN_TO_BE_REPLACED